Presenting yourself online in an emotionally available way can result in that flush of new love that we are all looking for. But what happens when your Mister or Miss Awesome is far away? What can we learn about long-distance relationships to make the time-space factor easier to deal with? Is there anything that such a relationship can teach those of us not willing to take such a risk?

By way of presenting my bone fides, my last two relationships have been long distance. For two and a half years while living in San Francisco I dated a man from Seattle. Later, for more than three years, I dated a man from Hamilton, Ontario. For the first year I was in North Carolina, but I moved to Buffalo, NY, in order to be closer. Of course, even though we were less than one hour apart by car, there was an international border to cross any time we wanted to cuddle!

After six years of doing this, I’d be willing to do it again (although I don’t need to, thankfully!) because of the things I’ve learned by going through the process. These same points are valuable for “local” relationships as well as Long Distance Relationships (LDRs)

The most important thing that I’ve learned as a writer is that humor, especially sarcasm and irony, fail miserably on-line. Attempting to communicate in a “sassy” way will blow up in your face. Trying to ironically understate the importance of something will result in your partner thinking it’s not important. Words online have to be 100% literal. Unless you’re an amazing writer of romance, please don’t do it. Full Stop.

The second most important thing I’ve learned is that if it’s worse  everything is important. During the first relationship, the SF-STL one, we flew back and forth each month, taking turns. Sometimes we managed to see each other for two weekends in the same month! We saw each other so often that we forgot to communicate in the day-to-day. Things that needed to be said were always held off until the next time we saw each other. The result was emotional time bombs that usually exploded moments after one or the other of us stepped out of the Alaska Air terminal, most often on the drive home.

Remember to say things when they are important to be said even in text. Don’t store up all that emotional energy for the next time you see each other.

2) Virtualize! Virtualize! Virtualize!
This builds on the last item and leads to the next. There are some times when you and your new love can not be together. But there is no reason not to try! Communication on the internet has been busted wide open by the use of smartphones and mobile technology. Now there’s video chat and unlimited data/calling plans to keep you in touch. The New York Times Magazine calls this “Ambient Intimacy”. Regular relationships have this build in by physical proximity. Those of us in LDRs need to make our own with tech.

Zoosk lets you communicate with each other via text or video chat. This makes chatting easier and can enhance your intimacy during those times that you are apart from each other.

When I was dating the Canadian he got a phone number from Google Voice that was local to me in North Carolina. The service was (and is) free and it forwarded to his Canadian Cell phone and let me talk to him whenever I wanted. His own calling plan let him call the States so we were never fall apart. My Google Voice account now allows me text him directly from my computer for free.

Skype facilitates international calling at discount rates, but also allows for video chat. One friend of mine calls family in Poland (for free!) as often as she can to show live pictures of her child.

Unless there has been a clear and open agreement, you’re not setting up shop in one place. You have to set up shop in two places for this relationship to work.

Hamilton, Ontario, became my second home. More people in Hamilton knew who I was than in Buffalo! I would walk up James Street North, for the monthly Art Crawl and be waived at from shop windows, get hugs on the street, etc. My partner worked just as hard to know people in Buffalo, although with less success – mostly because of Population Density in the American Rust Belt, but also because people in Hamilton are so durned friendly!

Using Zoosk’s Romantic Social Network you can build a profile for the two of you that you share with your friends in both locations. You can post pictures, share comments about eateries in either location, and let the friends in one place know about what happened last weekend when you were out of town. And, of course, you can share your personal events with your friends in both places. If you link it up with Facebook and Twitter, even when you go on vacation you can make posts that all your circles can share.

You need to move easily between two worlds. The stereotyped image is “I have a drawer in my partner’s bedroom.” But the reality you need two lives: it’s a huge pain to only have a change of clothes for a long weekend – better to have several in the house. Shoes need to live in two places.

In a “regular” relationship this has obvious analogues: your circles of friend may never integrate; they may never even meet until your engagement party. But you and your partner need to move easily in both worlds and in the third world that you are creating together.

Clearly LDRs are special cases, but they underscore the weakness and strengths of “regular” relationships too. Communication is the key in all cases. A friend of mine, a clergy person, told a couple, “You never have to lie to each other, ever.” This holds true in LDRs and in other types of relationships. There’s a desire to only put your best foot forward, but the reality is that all the rest of you is going to show up sooner or later – and all the rest of your intended as well! Don’t use your online time to hide that as it will only break you up in the end.

And here’s the last thing I learned: both of my Long-Distance Relationships ended because of a change in my life that I failed to communicate successfully. In both cases, I downplayed the change, I even covered it over a little. But ultimately I had to be honest and it was that that caused the breakup to happen.

When you are not living in close proximity with the person you are dating (or, sometimes, when you are) it is possible to hide the parts of your life that might make the other party uncomfortable. These can be small parts (pets, family) or huge (religion, health, eating habits, etc). When you meet the prospective love of your life online, you need to bring your entire self to the table, online already creates a filter, don’t hinder the process by holding back anything that may be important to the relationship. 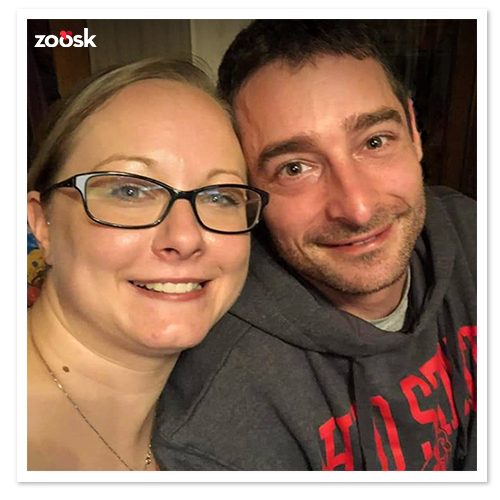 Be with someone who makes you look forward to tomorrow. Ron has a lifetime to look forward to with Rachael. He writes: “Just as I was about to unsubscribe from Zoosk, I got a heart from Rachael. For some reason I felt like I needed to message her. When we got to talking, we learned that...Read More